The store will not work correctly in the case when cookies are disabled.

We will notify you via email when the stock item is back available.

Who will rule over ELDRADOR®?

Nasty creatures from five worlds confront each other – the battle for the super weapon is on. 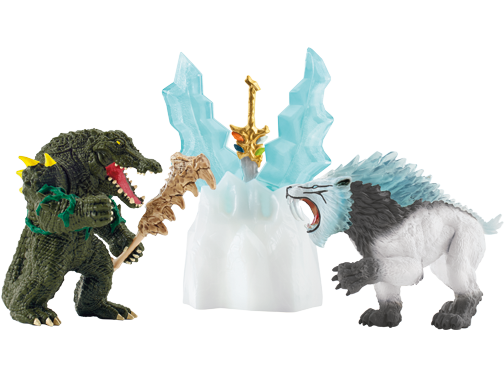 Only one thing counts in ELDRADOR® - the super weapon!

The villains in ELDRADOR® are sworn enemies. Since time immemorial the worlds have been concerned with one crucial question: Who is in possession of the super weapon? All the villains have only one goal: To seize power in ELDRADOR® – and whoever snatches the super weapon will rule. The weapon is a magic sword that grants its owner invincibility and an evil, destructive power. What’s more: The world in which the sword is located spreads to all the surrounding worlds!

Attack out of nowhere!

Discover some of the nastiest creatures from ELDRADOR®!

The lava scorpion patiently lurks in the rugged crevices of the lava world. If you get too close, he attacks with his red-hot, ultra-strong pincers. If you still dare to attack, he uses his fiery stinger.

With his white fur, the snow wolf is perfectly camouflaged in the ice world. He can pick up his opponent’s trails and then launch an ambush all on his own. But if he ever does need help, he can howl to summon the ice dragon.

The monster gorilla is a master of attack: As soon as an enemy enters the jungle world, he climbs up a tree with his strong arms and long claws. Then he lets out a deafening scream and attacks the intruder from above! The opponent gets to feel the poisonous thorns that the monster gorilla wears on his head and arms!

He not only has movable liana arms, but also a rotating, thorny tail. With so many weapons on his body, it's no wonder the powerful and unpredictable jungle creature can take on multiple attackers at once.

The lava dragon is lord of the skies in the lava world. With his large, strong wings, he is extremely agile and as swift as an arrow. If you mess with him, you get to feel his thorny tail or ultra-hot fiery breath.

The blizzard bear makes you freeze in fear: He has several weapons to sweep his opponents off the ice. If he touches an intruder with his ice claw, they will instantly turn into ice. With his magical ice pick, he can unleash a violent blast of ice particles that sweeps his enemies away. If you dare to attack him despite all of this, he is well protected by his sturdy breastplate made of ice.

The fire eagle circles high above the volcanoes. From there, the dreaded bird of prey has the perfect view: As soon as an enemy enters the lava world, he starts to dive with his huge, movable wings. The fire eagle then grabs the intruder with his sharp claws and pecks them with his beak. Ouch!

The ice dragon rapidly chills his opponents: He is a fast and agile aviator who can catch up with his enemies in a flash. His wings are studded with dangerous ice thorns, which can pierce even the strongest armor! And a whiff of his icy breath is enough to freeze attackers in no time at all!

The stone monster can’t keep his approach secret. Because all of ELDRADOR® shakes with each step! And his strength keeps on increasing each day. The more green crystals the stone monster eats in the stone world, the stronger he gets. And he’s almost invincible today.